It was Coleman Mockler, the former CEO of Gillette, who said “every minute devoted to putting the proper person in the proper slot is worth weeks of time later.” This is especially true in demanding roles; roles that have a significant bottom-line impact and have considerable, measurable fluctuations in productivity.

Which roles in your organization are demanding roles and most worth expending extra time and care in finding the right person? How do you tell?

Consider this example. No one would disagree that an airline pilot is a key role. How substantial, though, are fluctuations in performance? What kind of impact on the bottom line would a high-performing pilot have versus a moderate performer?

It’s rare that you would base your decision on which airline to choose on the relative performance of the pilot.

If you take a sales role, on the other hand, there are dramatic differences in performance and impact. The top performers outperform average performers by a significant margin (67% according to a study by McKinsey). They can make or break the bottom-line. A superstar sales person can have a much greater impact on the company’s profitability than a superstar pilot.

Behavioral assessments and pre-employment assessments can play a pivotal role in the hiring process for demanding roles; roles like leadership or sales, where there is pressure on the individual to influence others to achieve a goal. Companies are hoping to spot superstars. In roles like pilots and engineers, more cognitive or technical screening is required to ensure people have the capacity to handle the complexity of the job.

Through years of research, The McQuaig Institute has found that success in demanding roles can be predicted by measuring an individual's core temperament, such as competitiveness, drive, self-direction and a desire to be in control of one's destiny.

While confirming that these qualities exist does not guarantee a superstar, the likelihood of someone becoming a superstar in a demanding role without the right temperament is very unlikely. Assessments help screen out people who are not natural sales people or leaders. And when the natural temperament does exist, assessments can help interviewers better understand the extent to which candidates are applying these talents productively.

Image courtesy of Ambro at FreeDigitalPhotos.net 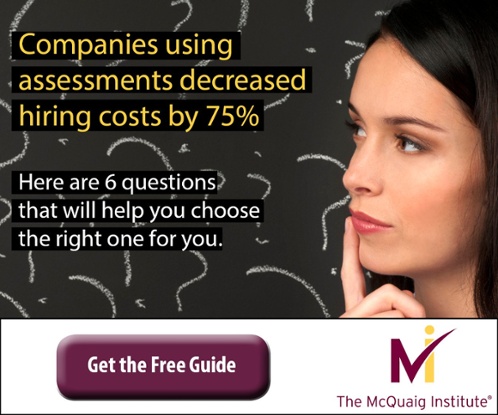