What does onboarding say about your company?

What does onboarding say about your company?

Onboarding has been a hot topic for about three to five years now in the HR space, in large part because other terms connected to the early stages of employment have also become “hot.” Onboarding is deeply tied to employee experience -- it’s the first steps of being an employee, after all! -- but has connections to employer branding, candidate experience, and more. Some of this is admittedly semantic: if a candidate has accepted their offer, aren’t they technically an “employee?” Organizations often get too caught up in the words and terms they’re using instead of actually focusing on the process.

The fact is, onboarding is important. Very important. 90% of executives see onboarding as a challenge currently, which makes sense when you consider somewhere around 1 in 5 new hires leave before the six-month mark. What would make someone jump ship that fast after going through a potentially-long hiring process? There are lots of reasons, of course. They could have gotten more money somewhere else rather quickly as a passive candidate. But in many of those quick departure cases, they were active candidates, meaning that within six months, they’re already looking for jobs -- and probably applying to them on your time.

How does that even happen?

Well, probably because many organizations don’t even focus on onboarding that much at all: 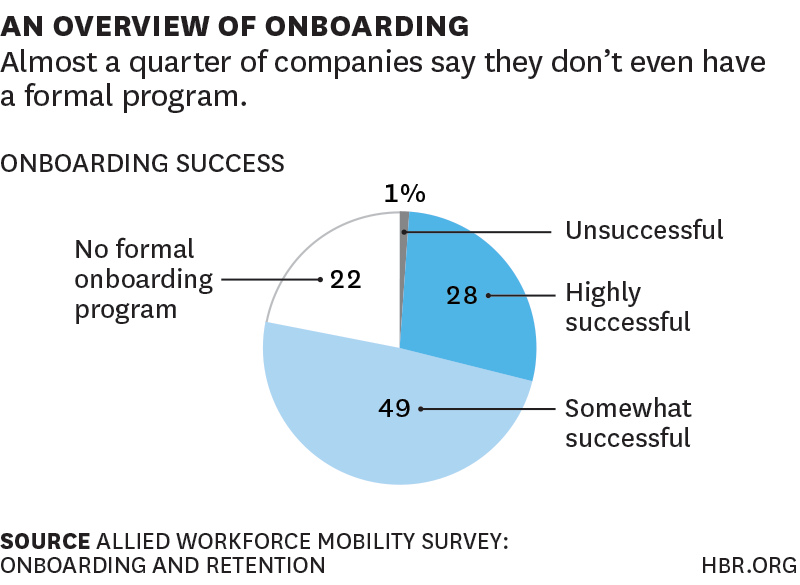 Only about 3 in 10 view their program as “highly successful,” and 2 in 10 don’t even have a program. That’s the bulk of the problem here. And paradoxically, one of the reasons companies don’t focus as much on onboarding is because they want new hires who will “hit the ground running,” i.e. can instantly be thrown into the deep end of project work. Unfortunately, that “hit the ground running” idea doesn’t line up with the science of how people enter new roles.

Read More: Check out these 8 tips to improve your onboarding program

How do we make onboarding better?

There are many approaches to onboarding but let's take a look at some real world examples of onboarding done right. We’ll start with Facebook. They’re under siege a bit recently, for sure, but how they onboard speaks to a powerful idea.

Here’s an interview with the author of a new book called Chaos Monkeys. It’s about Silicon Valley culture. The author had a company that was acquired by Facebook. Here is an interesting paragraph:

Your first day at Facebook, you’ll have two emails in your inbox. One is a sort of generic, “Welcome to Facebook.” And the second one is, “Here’s a list of software bugs to fix.” On your first day, you’ll pull a version of Facebook’s code to your personal machine that’s your version of Facebook. You’re encouraged to go ahead and make changes, upgrades, improvements, whatever, from day one. You’re actually entrusted with that much authority. Facebook is literally a quarter of the internet everywhere in the world, except China. Here, some 22-year-old engineering grad has a version of it on his machine and he’s going to push a change to it today.

See how this is different than “Let’s walk through the office and do some generic intros with middle managers?”

This is Day 1 legitimate target-hitting. You’re going to make a difference, in some small way, at Hour 4 of employment. That’s big.

Pro-Tip: Want more help onboarding? Download a free guide to get you started

Now let’s move to John Deere. From an article on “the importance of moments:”

There’s a group at John Deere in India, where they face a really competitive labor market for engineers. On the first day, a new employee is met by a friend they had been corresponding with who shows up with a favorite beverage, and they walk to their cubicle. It’s already set up. In fact, the first email is from the CEO of John Deere, who talks about the legacy that we have, 175 years of innovation. The fact that we’re making products that make people food and give people shelter, so we’re doing important things for the world. He welcomes people to their first day. On the desk is a model of the first file that John Deere ever patented. It was a plow that you could pull behind your oxen or your horses that didn’t get caught up in root systems when you were plowing a field.

See why this would be important and offer instant context for the value of the work to be done now that you’re part of this team? 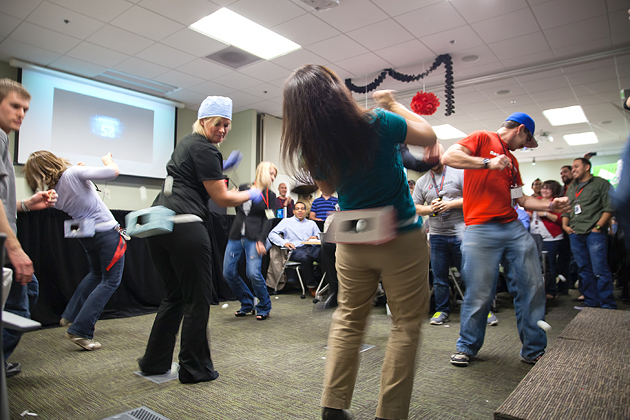 That’s from the onboarding process at Rackspace, which includes music, games, food, a limbo bar, and more. This might seem juvenile to some -- aren’t workplaces supposed to be professional at all times? But as noted business consultant and thinker Robert Poynton (among others) have argued, letting adults embrace the idea of “play” (often left behind in your teens) is a great motivator and incentive to want to come to work and do your best there. Rackspace (and other companies) build these elements of fun right into the onboarding process. Imagine coming home to your significant other after a day like the above photo versus a day of filling out HR forms. Which job are you more excited about? Which one can you already see yourself still at in six to 12  months?

And finally: Buffer, the social automation platform, uses a three buddy system in their onboarding process. The three buddies are:

A new hire is introduced to the buddies prior to official Day One, which speaks to an important element of any onboarding process: There needs to be activity between a signed offer letter and the first day on the job. That can be as simple as giving the hire access to a portal where they can complete forms, (lessening day one paperwork), or it can involve the introduction of work buddies or other team members.

You only get one chance to make the most of your onboarding program and create an impact on your new hires. Making onboarding fun. Make it relevant. Make it important. Make the new hire feel part of something. Remember: changing jobs is a huge deal in adulthood. It’s the adult equivalent of going to a new school. Make it matter and count. Your entire team deserves that and if you succeed on this first step, you may be laying the ground work for a strong corporate culture, better employee engagement, and longer employee retention in the future.

HR is never short on challenges to handle or fires to put out but how will that... read more

Artificial Intelligence In A New Decade

We’ve heard a lot about the implications and applications of artificial... read more

2020 marks the start of a new decade, not just a new year, and before we dive... read more

10 Employee Appreciation Ideas For The Holidays

Wishing you all happy holidays and a great new year!   As we reach the end of... read more